You are using an outdated browser. Please upgrade your browser to use this web site.
This item has sold!
View other listings from silverlight or
click here to contact them. 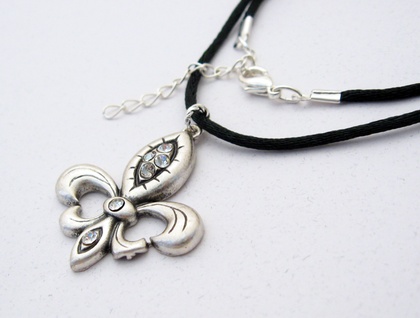 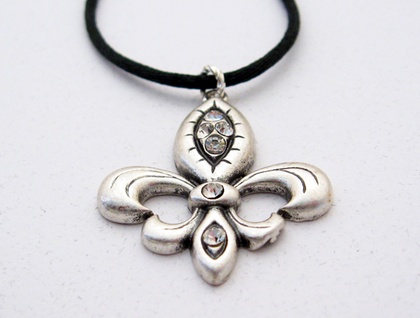 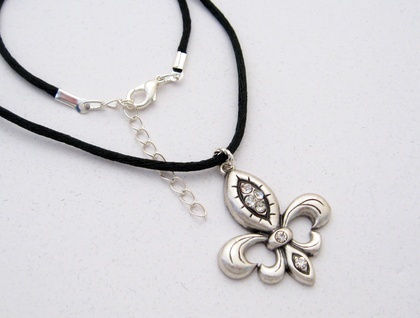 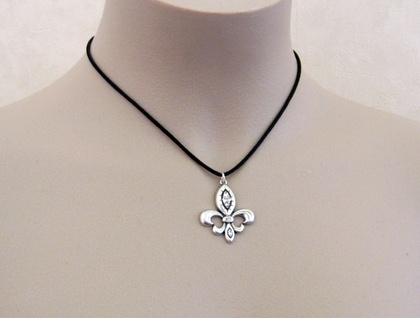 NZ $32.00
add to favourites  add to wishlist  add to showcase
share  tweet
This necklace features a silver fleur-de-lys pendant, with fine detailing, set with six clear, sparkling rhinestones.
It is suspended on a length of satiny black cord, which is finished with a silver-plated lobster-claw clasp and a silver plated extension chain. All other parts - including the cord ends and the little twisted ring from which the pendant hangs - are also silver plated.

The pendant itself is a beauty. It is not silver plated, but has a muted silver tone; not bright and shiny, but not matte either; just softly gleaming. The details of the design are picked out in black. It is comfortable to wear: solid metal, but not too heavy.
This necklace is a one-off design, never to be repeated.

'Fleur-De-Lys Argent' means 'silver lily-flower' in French. The fleur-de-lys or fleur-de-lis (literally 'flower of the lily') is a heraldic symbol: a stylised lily consisting of three petals bound together at their bases. Its graceful shape is featured on the former royal arms of France, where it is shown in gold on a blue field (background).

'Fleur-De-Lys Argent' measures 39.8cm, including the lobster-claw clasp, with a further 5.3mm of extension chain. The pendant measures 37mm lengthwise, including the baile (hanging loop), and 32mm across at its widest point.