Wellington-based writer Rosemary McLeod is recognised by most as a columnist and commentator, but she is also well known in the maker movement as a knowledgable speaker about – and collector of – domestic handcrafted items. From pinnies to rag rugs, toys to tea cozies, McLeod rescues and values them all, both for the painstaking work they embody and the stories they tell about women’s lives. 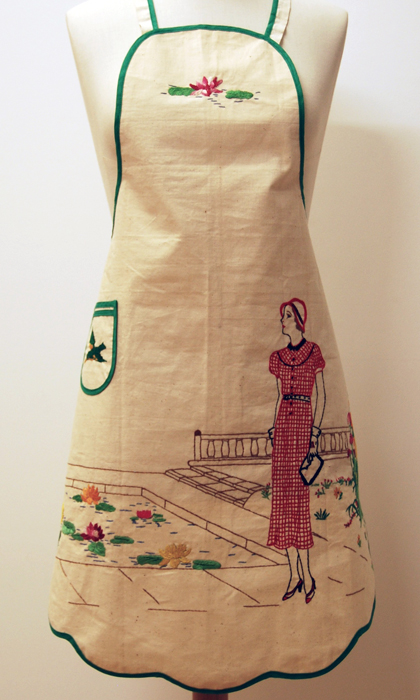 With Bold Needle and Thread, a touring exhibition created by McLeod and Tauranga Art Gallery Toi Tauranga, and currently on display at the Waikato Museum Te Whare Taonga o Waikato in Hamilton, showcases her vibrant collection in a way that immediately draws the viewer in and encourages reminiscence. In fact, I was not there more than a couple of minutes before I was drawn into a “My grandmother had one of those…” conversations with a complete stranger.

The pieces in this exhibition date from the 1920s to the 1960s, and what struck me first was the way even the most mundane and functional pieces were painstakingly decorated – even the robust hessian aprons and the linen bags for laundry and delicates. 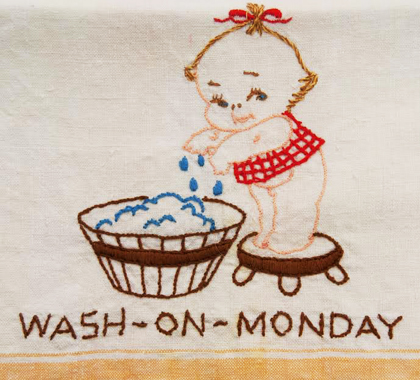 My mother reminisced that her aunties wore very similar hessian aprons in the mornings – while doing the heavier household tasks like washing and cleaning – before they donned the pristine, fancy cotton and linen aprons in the afternoon for receiving guests and serving tea. This variety of aprons and pinnies was of course a necessity in an age when the washing of clothes was much more arduous than simply throwing them in an automatic washer.

One large wall display held 1920s and 1930s aprons that were near-identical in shape and clearly based on the same pattern, but all showed highly individual flourishes of embroidery and appliqué. Popular subjects included fashion-plate portraits of elegant European flapper ladies or more ‘exotic’ oriental and Maori women, as well as commemorative designs for coronations, Jean Batten and even Phar Lap. Perfect miniature aprons for dolls and little girls allowed daughters to imitate the roles of their mothers. 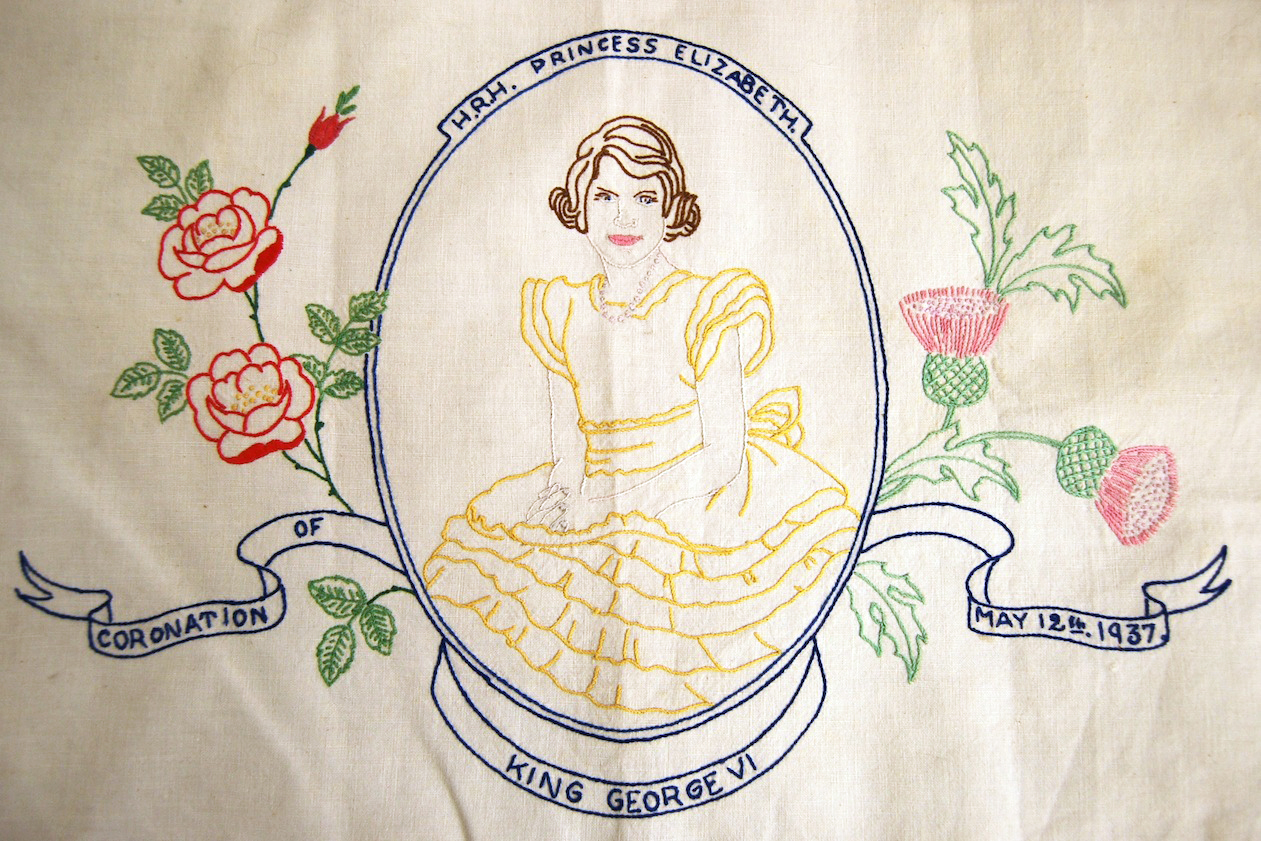 The issue of gollies and stereotyped “exotic” racial representations was tackled, as these were popular subjects: appearing on bags, aprons and decorative embroideries, as well as in the form of dolls. Mute left overs of the colonial past, they nevertheless remind us that this chapter of social history is still uncomfortably recent.

Vast numbers of bags for the various needs of the housewife – projects, handbags, laundry and storage – several carrying labels such as “dusters,” “stockings,” or “pyjamas,” in flourishing embroidery – show not only that there was a place for everything and everything in its place, but also that that place was ideally as attractive as the housewife could make it. Not only were tea pots wrapped in tea cozies (made to resemble everything from whares to Victorian belles) but those tea cozies were sometimes even topped with an additional decorative linen cover. 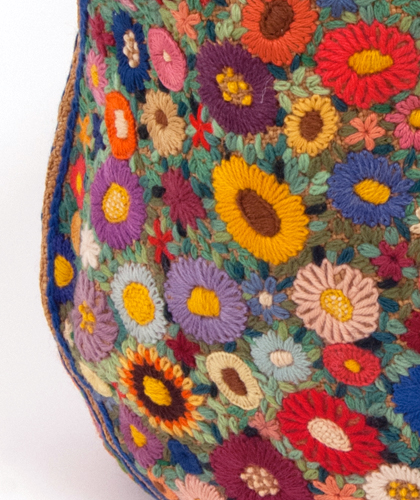 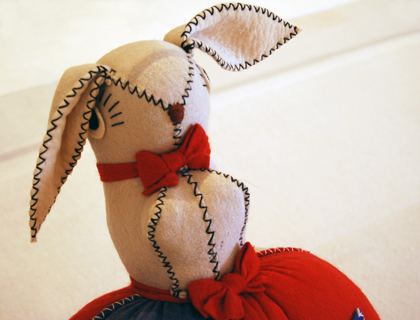 A display of decorative and framed embroideries shows that English scenes were a popular theme – revealing the time’s nostalgia for the old country. Many of the period still referred to Britain as home, even though they had never seen it. Magazines such as Needlewoman and local department stores provided numerous patterns and transfers for those in need of inspiration.

What this exhibition highlights to me is the sheer talent of the (often forgotten and nameless) makers of this work. In a time when women were discouraged from pursuing “fine” arts and design, their skills and creativity shone through in the pieces they made for the home.

The exhibition also contains a display of replica pieces made by Rosemary McLeod and Marilyn Daly, and is supported by a sumptuous catalogue, With Bold Needle and Thread: Adventures in Vintage Needlecraft. The exhibition will be open at the Waikato Museum Te Whare Taonga o Waikato until 15 June, so make sure you don’t miss seeing this important collection of New Zealand domestic decorative work. 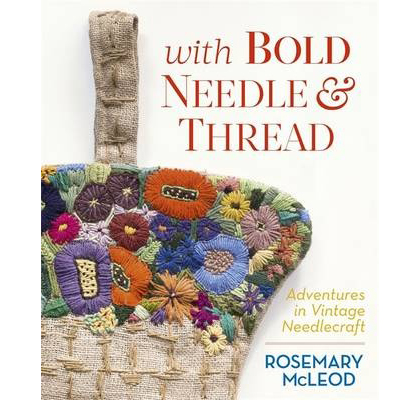 Jo Drysdall has had a variety of alter-egos over the years, running the gamut from librarian to corsetiere, archivist to horticulturalist. These days she is the friendly face behind the customer service keyboard at Felt’s HQ. When not facing identity crises she enjoys ogling books on textile art and vegetables. 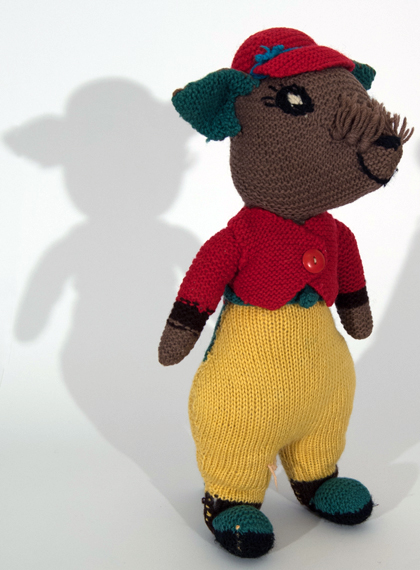