In the wake of the Christchurch quakes many books have been published about the immediate destruction, the long-term losses and the humbling human response in the days that followed each set of major shakes.

Christchurch: the Transitional City Part IV, edited by Barnaby Bennett, Irene Boles and Eugenio Boidi, catalogues a different aspect of that human response: not the heroic actions of emergency services and civilians, but the continuing responses of everyday people to the utterly changed city we find ourselves in – artistic, practical and creative. 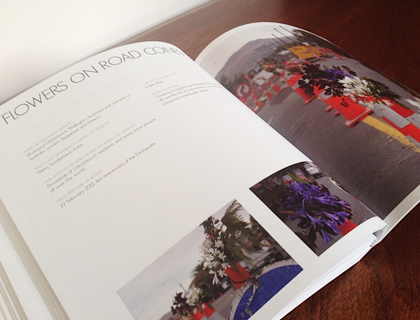 The book itself is a plain design, with a simple solidity that belies its diverse and colourful contents: a collection of transitory projects, memorials, political commentaries and protests, responses to immediate community needs and efforts to bring a smile or two in the vacant spaces. In total it records 153 temporary and transitional projects that have occurred in Christchurch since September 2010. The introduction is kept simple and brief, but manages to vividly convey the emotional rollercoaster that has been the last few years for Christchurch residents.

The projects are presented simply – participants have answered a series of questions and their responses are printed along with images of their project. Flicking through the pages, I was immediately struck by the range of voices represented and their differing viewpoints – a lack of unity that is eye-opening and refreshing when compared to the mainstream media’s portrayal of post-quake Christchurch. This sense of disunity (and I use that word positively) is enhanced by the complete absence of any attempt to categories the projects – they are presented in simple alphabetical order. 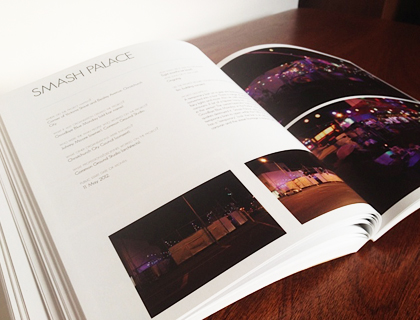 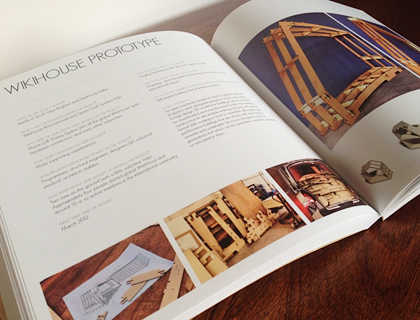 Artistic and crafted projects are numerous. Murals are strongly represented – a natural response to newly-exposed walls – along with landscaping and gardens, decorated portaloos and the efforts of Gap Filler, Greening the Rubble and the closed Christchurch Art Gallery to bring art life and colour to the city’s growing empty spaces. The heart-wrenching “185 chairs,” delightful “Dance-o-Mat,” and the practical efforts of the Student Volunteer Army are also documented, again showing just how varied the experiences and voices are that make up this historical record.

I was delighted to see my favourite pieces of paste-up wall art preserved in this book’s pages: a cartoon “nibbler” crane saying “Nom Nom!” and the large rosette pasted to the fence of the demolition site of the Crowne Plaza Hotel. They perfectly captured the quirky humour of post-quake Canterbury but, being paper, had a limited life-span. Nom Nom was carefully preserved on its wall for a couple of years before being built over, but the more vulnerable Best Demo rosette lasted only a few weeks. Many of the projects in this work have already had their time and disappeared. Their ephemeral nature, whether by design or by circumstance, is what makes this book such an important record. Official histories and mainstream media have a tendency to record the “big events” and iconic images, never seeing the grass-roots, less dramatic efforts of individuals and communities. Individually many of these projects may not have even been seen by the majority of Christchurch residents and have already faded into memory, but collectively they are an expression of an important part of the mental and physical recovery of a city and its people, as well as a time of amazing creativity.

Jo Drysdall has a variety of alter-egos, running the gamut from librarian to corsetiere, archivist to horticulturalist. When not facing identity crises she enjoys ogling books on textile art and vegetables.